Kevin Southgate is March’s Big of the Month!

March’s Big of the Month is Kevin Southgate! 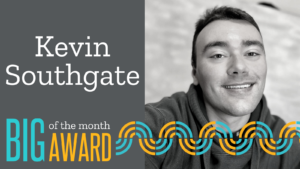 Kevin is a mentor for our Game On! program. Since signing up to volunteer in 2017, he has facilitated a whopping 10 sessions, serving over 60 boys during that time. (We can’t confirm it, but we’re pretty sure this is an agency record!)

Kevin decided to volunteer with our agency as a way to explore potential career options. Now, in his third year of university, Kevin says that volunteering with BBBS is what inspired him to pursue a career in social work.

We selected Kevin for this award because he is a true asset to our agency. He is a reliable and enthusiastic mentor and was a big help in transitioning the Game On! program to a virtual platform when the pandemic hit.

Kevin’s humble approach to mentoring is as impressive as his commitment to it. He has gone into mentoring with an open heart and mind, taking every opportunity to learn more about how he can best support the tween boys who participate in Game On!. As he puts it, “I’ve never really gone into a session thinking that I’m going to make a big difference. One thing that I’ve learned though is that every interaction and conversation you have is going to have some kind of impact. I think if you’re willing to really listen and ask genuine questions, children will want to share their struggles, strengths and feelings with you.”

With 10 Game On! sessions under his belt, it’s clear Kevin’s belief in the power of mentoring is strong. When we asked him why he thinks mentoring is so valuable, here’s what he had to say, “I think no matter what, it’s very beneficial for a child to know that people and adults care about them, and when this person isn’t a part of their family or someone who is paid to be with them it’s especially meaningful.”

Thank you, Kevin, for creating so many meaningful experiences for the boys in our community.

Heather Shea is August’s Big of the Month

Nadine Bilawski is July’s Big of the Month

Nicole Singer is June’s Big of the Month

Daniel Rahman is May’s Big of the Month

Rick Chenier is April’s Big of the Month!

Kevin Southgate is March’s Big of the Month!

Scott Collins is February’s Big of the Month

Kiel Baker is January’s Big of the Month!

Danielle Vanhie is December’s Big of the Month!

Jennifer Prevett is November’s Big of the Month!

Heather Schultz is October’s Big of the Month

Our first ever Lawn Bowl for Kids Sake was a great success!

BBBSOLA Partners with the Factory

Over 4,000 kids on Big Brothers Big Sisters waitlist in Canada